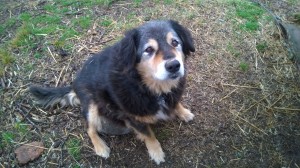 Bubba and his sister, Cissy, were part of a litter of five puppies that my stepdad found in an abandoned trailer. He looked after them until they were weaned, and he tried and tried to catch the mother dog, but couldn’t. Finally when the puppies were old enough to be away from their mother, he took them all. We adopted out three, and kept two. Two were returned. The two sets of littermates are well into their teens and have their share of old-age problems,but they are all very sweet puppos. This is Bubba, who was always the most robust of the group, but now failing vision and joint issues slow him down a bit.

We are currently not taking in more surrendered animals. We are at capacity and in great need of finances and space. Please do not contact with requests to take animals.